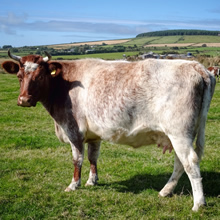 A hardy breed, able to survive harsh winter conditions on meagre rations, the Northern Dairy Shorthorn is the world’s rarest breed of cattle. Less than 125 specimens survive today and nearly half of those reside on the Isle of Man.

In the 1950s, they were the commonest breed on the Island and widespread in Great Britain, but commerciality has brought the breed close to extinction. In 2012, six heifers – one in calf – were imported to Clypse Moar. The pregnant heifer calved at Christmas and her son was the first NDS calf born on the Isle of Man in over 50 years.

In Spring 2013, an additional 11 animals – including two young bulls – joined the small herd and they were all moved to Ballaloaghtan farm. By 2016, in collaboration with UK breeders we had grown the worldwide stocks to over 120. On our farm you can see the world’s largest and most significant holding of this ultra-rare breed. 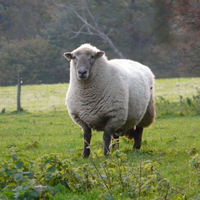 A starter flock of this splendid breed – native to the Brecon Beacons area – was purchased at auction in mid 2012 and early 2013; nine ewes and a tup made their way over to the Isle of Man. It was initially believed that this was the first appearance of the breed on the Island, but subsequent research established that Lord Cussons, of soap fame, had a flock many years ago. 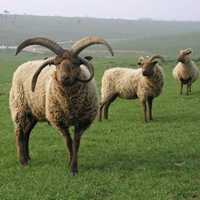 The iconic symbol of Manx agriculture, the Loaghtan sheep neared extinction in the 1980s, with estimates of the surviving population dropping as low as 18. Today, the species is listed as endangered in Great Britain due to the low numbers of registered breeding ewes, but they are now considered as a ‘rescued’ flock on the Isle of Man, as there are perhaps some 3,500 examples alive and well today, yielding delicious meat, which can be purchased in several Island butcher shops. Manx Rare Breeds are home to a small flock of between 20 and 30 Loaghtans. 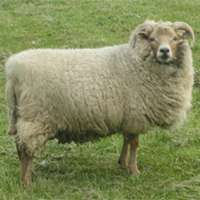 Relatively small, the average weight of an adult Portland ram is 55kg, rarely exceeding 66kg and 65cm at the withers. The body of the Portland is of a primitive type within the Downs breeds, with good width between the legs. The tail is long and set well up on the rump.

The face is a tan colour, but may have lighter areas around the eyes and muzzle, with and a dark nose. Some sheep carry a light covering of wool on the forehead, but the rest of the face is free from wool. Horns are a light colour; the rams are heavily spiralled; in ewes they curve through a half circle. There is often a black line in either one or both horns.

Lambs are born with a foxy red coat, which changes in the first few months to creamy white. The wool is close and fine with a short staple, though some red kemp fibres should be found on the britch. 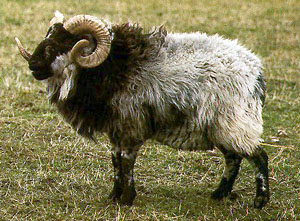 Boreray Sheep have a close geographical and social link with Soay Sheep, but the two breeds are genetically different. The Boreray Sheep is a descendant of the domestic sheep which were kept by the St. Kildans.

Despite being partially derived from a long-tailed breed (the Scottish Blackface), Borerays display characteristics that group them with other northern European short-tailed sheep. They are amongst the smallest sheep in the British Isles, with mature ewes weighing 28 kg (62 lb) and standing 55 cm (22 in) at the withers. Less than 300 survive today, with about 10% of the worldwide population at Manx Rare Breeds. 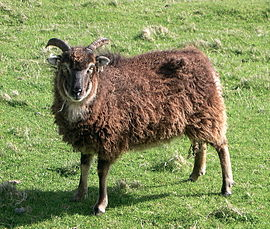 One of three “primitive” breeds nurtured at Ballaloaghtan, this sheep comes from Soay Island in the St Kilda Group off the west coast of Scotland. Soay means “Sheep Island” and the feral flock there is ancestral to a handful of exotic groups existing on the UK mainland, both in captivity and in feral state. A particularly hardy breed, it is classified as “at risk” by the RBST because only around 1,000 registered breeding ewes remain. From a produce point of view, each sheep gives only about 1 kg of fleece each year, though it is very fine and highly sought-after by weavers. The carcase is small, producing a low cholesterol meat but with a strong gamey flavour. One of many distinct characteristics of Soay is that they do not have a herding instinct, meaning that if a sheepdog attempts to control them they disperse in different directions. It is possible that the Soay has existed in more or less its present configuration for about 6 million years. 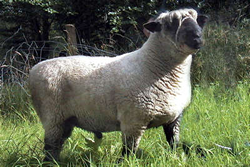 The largest sheep on our farm is the Oxford, an English breed dating back to the 1830s. It produces a relatively high weight of meat and an impressive quantity of wool. The RBST classifies it “at risk” with between 900 and 1500 breeding ewes remaining in existence. 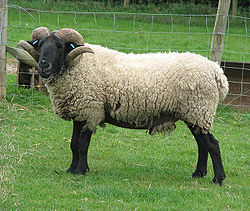 Another meat-producing animal, the Norfolk Horn has an amazing history of near-extinction and a return to our world in recent history. It is tough and lightly built, and famed for its jumping (escaping) ability. By the First World War only one flock survived, and after the Second World War the remaining number fell to 10 ewes and two rams. The last pure-bred ram died in 1973, and in the mid-1980s only a concerted, dedicated effort by the RBST brought it back from Category 1 to Category 4. Today there are over 900 registered ewes and the breed has earned new fans and recognition for conservation grazing. Norfolk Horns do particularly well on wet uplands, meaning that they thrive on our marshy fields below South Barrule.

The name says it all and this is a moorland sheep, descended and improved from ancient types that grazed Dartmoor in ancient times. The fleece is more wavy than curly and covers the entire animal except the face. It’s hardy, deals with almost all weather types outdoors, and grazes many types of pasture and vegetation. 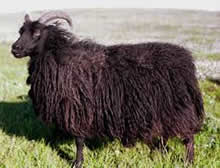 A primitive type, the Hebridean was probably introduced into the Scottish highlands and islands by the Vikings. Its fleece is black, often jet black, and while small it is resilient, eats almost any type of vegetation, and may have a natural resistance to foot diseases. The ewes are excellent mothers though production is not prolific.